Blackheath has been described as a serene, peaceful place with an undercurrent of bustling village life. Situated close to Canary Wharf, the area draws young professionals and families who prefer the period charms of older properties to the modern apartments in the City. Only seven miles outside the centre of London, the area has managed to retain its unique, historical character and now offers village-style living complete with local stores, farmers’ markets, and regular community events.

Blackheath is situated in South East London predominantly within the London Borough of Lewisham. 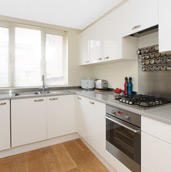 Property to rent in SE3?

We're the Blackheath Estate Agents for you! Find out how we let properties in Blackheath in little over a week...

As Blackheath Estate Agents we're ideally placed to sell your home - and we know exactly how to achieve a higher price while putting you in complete control.

Blackheath is steeped in history, with its name being recorded as far back as 1166. The area’s tumultuous past saw it become the focal point for several peasant rebellions and uprisings; it was also a notorious haunt for highwaymen throughout the 17th and 18th centuries, and later it became a meeting point for the London Society for Women’s Suffrage in 1909. Blackheath takes its name from the large open grassland which separates it from Greenwich to the north and Lewisham to the south and west.

As estate agents, Blackheath provides us with a good mix of housing to offer buyers. The property landscape comprises substantial Victorian and Georgian houses (some of which have been converted into flats), Grade I and II listed buildings, and some functional post-war housing. The Cantor Estate, built by John Cantor during the 1800s and now classed as a conservation area, offers some of the area’s most sought-after properties ranging from mock-Tudor houses and Edwardian mansions to 1960s apartment blocks. The wide range of housing stock, coupled with increased interest in the area, has meant that Blackheath has gained a reputation for being more affluent and desirable than neighbouring Deptford and Lewisham.

Due to its excellent position for commuting to Canary Wharf (you can even bike commute in less than 15 minutes!), the area has seen a marked increase in investment from City workers looking for a village location within easy reach of the office. Likewise, the mix of excellent state schooling – including some schools with “Outstanding” Ofsted reports – and private schools in the area attract young families. A high percentage of people come to Blackheath as tenants and end up becoming home-buyers, eventually settling as life-long residents. As a local letting agent, SE3 is an area we believe has great buy-to-let investment potential.

The focal point of Blackheath is the historic Heath, one of the largest areas of common land in Greater London with over 200 acres of protected common. The Heath is where community members meet and hold regular events – such as the annual fireworks display in November, which attracts more than 40,000 spectators. Blackheath has one of the oldest amenity societies in England, which promotes better living for residents and organises community days to help maintain woodland and keep the Heath litter-free. The area also has its own newspaper blog, The Blackheath Bugle.

The area has a well-established sports scene with provisions for golf, cricket, rugby and kite flying – and it is also the starting point for the London Marathon. As boasted by residents and estate agents, Blackheath has beautiful walks and several natural beauty spots which are home to myriad flora and fauna. The Duckpond on the Heath is a great place for a picnic or to feed the ducks. If you’re looking for a bit of culture, try Blackheath Arts Gallery or Blackheath Halls, a concert venue owned and managed by Trinity College of Music.